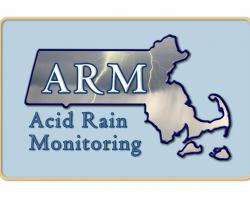 Our second year back after a one-year hiatus due to the COVID-19 pandemic, our citizen scientists collected 137 samples on April 10, 2022.
If you would like to volunteer next year to collect samples or analyze them, please contact Cameron Richards.

The Acid Rain Monitoring Project began at the University of Massachusetts Water Resources Research Center in 1983. The project's mission was initially to develop a comprehensive picture of the sensitivity of Massachusetts surface waters to acid deposition, and later evolved to determine long-term trends in this sensitivity.

In Phase I (1983-1984), citizen volunteers sampled 1000 streams and lakes monthly in the state and analyzed them for pH and alkalinity. Phase II (1985) studied 2500 lakes and streams twice a year (April and October) and expanded analysis to major cations and anions. Phase III covered 1986-1993, when a subsample of 860 lakes and streams were sampled 4 times a year (January, April, July and October). The final report is available as a printed report, downloadable PDF file

or on CD-ROM. The latter also includes the complete data sets.

After an eight-year hiatus, the project resumed in April 2001 (Phase IV), when samples were collected three times a year (April, July and October) at about 150 lakes and ponds (and a few streams) and run for the analysis of pH, alkalinity, total phosphorus, and major ions for two years. In the fall of 2003 we switched emphasis to streams and collecting in October and April but continued monitoring 26 sites on the long-term list of endangered water bodies. In April 2011 we switched half our sites back to ponds in order to document trends in acid rain sensitivity in both streams and ponds.

Due to budget cuts in 2011, sampling twice a year was no longer feasable. We are now sampling once a year, in April. In 2011, we changed the sampling site list to include ponds we had monitored in 2001-2003. Results for pH and ANC are posted here. More detailed results that include ions and color and historical data can be found in our searchable database. In 2010, we looked very closely at all of the data our volunteers have collected and analyzed since 1983 and our findings were compiled into our 2010 Annual Report

updates those results and has been posted.

Read a recent National Science Foundation: Acid Rain: Scourge of the Past or Trend of the Present?

Searchable Database
Search our database for full water chemistry records beginning with the start of the Project in March 1983. Samples were collected monthly from 1983 to 1984, semiannually from 1985 and 1986, and quarterly from 1986 to 1993. Current samples are collected semiannually. More than 40,000 records from nearly 5,600 lakes and streams are contained in the database.