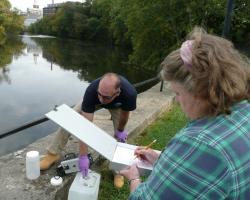 The UMass Amherst Blackstone River Water Quality Study was initiated in 2004 to develop a watershed management tool for the Blackstone River basin. This effort was funded by the Upper Blackstone Water Pollution Abatement District (UBWPAD) and was conducted with the support of the Cambridge, MA office of Camp Dresser and McKee (CDM), now CDM-Smith. The study was initiated to enhance the overall understanding of flow and water quality characteristics of the river.  The ultimate goal was to develop a tool to evaluate the impacts of waste water treatment plant effluent, the effectiveness of point source control versus non-point source management, and the effectiveness of alternative management strategies on downstream river quality. As part of the study, historical water quality data for the basin was gathered into a database consisting of over 35,000 observations collected by a wide-range of stakeholders. Additional dry and wet weather monitoring was conducted to supplement available data. While the primary focus of the database is nutrients and dissolved oxygen, it also includes data for chlorophyll, BOD, sediment, bacteria, heavy metals, and physical parameters (temperature, flow, etc.). The Blackstone River Hydrologic Simulation Program-Fortran (HSPF) Water Quality Model was developed for the study.

The USGS HSPF water quantity model of the Blackstone River watershed (Barbaro and Zariello, 2006) was utilized as the basis of the water quality model. UMass and CDM-Smith extended the simulation period of the USGS model and employed HSPF modules for simulating water quality in addition to water quantity. The USGS model consisted of 14 main stem and 36 tributary reaches. However, many main stem reaches included both impoundments and riffles. As part of the water quality modeling effort, CDM-Smith resegmented the Blackstone HSPF model to include 110 main stem reaches. Each resegmented model reach exhibits uniform hydraulic behavior and has a maximum length of 0.5 miles. The stage-discharge relationships of each section were developed from a HEC RAS model developed by CDM-Smith for FEMA mapping. The water quality model was officially released to the public for comment and review in 2008 (CDM, 2008). The model calibration to field measurements collected from 1997 through 2007 has been documented (UMass and CDM, 2008); an updated DO calibration based on hourly dissolved oxygen (DO) and temperature observations collected at several locations along the main stem was recently released (CDM, 2011). The model currently covers the period 1996 through 2008. Data collected by the USGS and MassDEP in 2008 were utilized for validation of the mainstem nutrient model (MaWRRC and CDM, 2011).

Ten scenarios have been developed to utilize the Blackstone Water Quality HSPF model to assess the effectiveness of three alternative management strategies on downstream water quality under actual flow conditions, including: (1) point source reductions at UBWPAD, (2) nonpoint source (NPS) pollution reduction, and (3) dam management to reduce or eliminate the additional travel time created by the impoundments behind the dams (MaWRRC and CDM, 2009; MaWRRC and CDM, 2011). In the model, dam management was simulated by the removal of the dams, but there may be other ways to achieve the same objectives. An eleventh scenario examined nutrient and chlorophyll conditions in the watershed pre-anthropogenic influence. In these scenarios, nutrient effluent limits for small WWTFs along the river were left at their historical values based on the best available data for each facility. Nutrient effluent limits for the two largest WWTFs, UBWPAD and Woonsocket, RI, were adjusted. The historical values for Woonsocket were adjusted to approximate attainment of the 2008 National Pollution Discharge Elimination System (NPDES) limit for that facility. Depending on the scenario, loads from UBWPAD were based on either historical observed values, values adjusted to approximate attainment of the 2001 NPDES plant design, or values adjusted to approximate attainment of the 2008 NPDES plant permit. Scenario comparison metrics were derived from a TMDL study for a river in nearby eastern Massachusetts (CRWA and Numeric Environmental Services, 2009).

The focus of work on the Blackstone River HSPF Water Quality Model has now shifted to additional data collection and refinement of the model, as needed, to reflect reductions in nutrient loads and new information about algal growth and extent. As of 2019, our team samples river water at 9 sites in the mainstem monthly from April through October.